The 28 House members who lobbied the Federal Communications Commission to drop net neutrality this week have received more than twice the amount in campaign contributions from the broadband sector than the average for all House members.

These lawmakers, including the top House leadership, warned the FCC that regulating broadband like a public utility “harms” providers, would be “fatal to the Internet,” and could “limit economic freedom.”​

According to research provided Friday by Maplight, the 28 House members received, on average, $26,832 from the “cable & satellite TV production & distribution” sector over a two-year period ending in December. According to the data, that’s 2.3 times more than the House average of $11,651.

What’s more, one of the lawmakers who told the FCC that he had “grave concern” (PDF) about the proposed regulation took more money from that sector than any other member of the House. Rep. Greg Walden (R-OR) was the top sector recipient, netting more than $109,000 over the two-year period, the Maplight data shows.

Dan Newman, cofounder and president of Maplight, the California research group that reveals money in politics, said the figures show that “it’s hard to take seriously politicians’ claims that they are acting in the public interest when their campaigns are funded by companies seeking huge financial benefits for themselves.”

Signing a letter to the FCC along with Walden, who chairs the House Committee on Energy and Commerce, were three other key members of the same committee: Reps. Fred Upton (R-MI), Robert Latta (R-OH), and Marsha Blackburn (R-TN). Over the two-year period, Upton took in $65,000, Latta took $51,000, and Blackburn took $32,500.

In a letter (PDF) those representatives sent to the FCC two days before Thursday’s raucous FCC net neutrality hearing, the four wrote that they had “grave concern” over the FCC’s consideration of “reclassifying Internet broadband service as an old-fashioned ‘Title II common carrier service.'”

The letter added that a switchover “harms broadband providers, the American economy, and ultimately broadband consumers, actually doing so would be fatal to the Internet as we know it.”

Not every one of the 28 members who publicly lobbied the FCC against net neutrality in advance of Thursday’s FCC public hearing received campaign financing from the industry. One representative took no money: Rep. Nick Rahall (D-WV).

In all, the FCC received at least three letters from House lawmakers with 28 signatures urging caution on classifying broadband as a telecommunications service, which would open up the sector to stricter “common carrier” rules, according to letters the members made publicly available.

The US has long applied common carrier status to the telephone network, providing justification for universal service obligations that guarantee affordable phone service to all Americans and other rules that promote competition and consumer choice.

Some consumer advocates say that common carrier status is needed for the FCC to impose strong network neutrality rules that would force ISPs to treat all traffic equally, not degrading competing services or speeding up Web services in exchange for payment. ISPs have argued that common carrier rules would saddle them with too much regulation and would force them to spend less on network upgrades and be less innovative.

Of the 28 House members signing on to the three letters, Republicans received, on average, $59,812 from the industry over the two-year period compared to $13,640 for Democrats, according to the Maplight data.

“We are writing to respectfully urge you to halt your consideration of any plan to impose antiquated regulation on the Internet, and to warn that implementation of such a plan will needlessly inhibit the creation of American private sector jobs, limit economic freedom and innovation, and threaten to derail one of our economy’s most vibrant sectors,” they wrote.

The third letter (PDF) forwarded to the FCC this week was signed by 20 House members. “We respectfully urge you to consider the effect that regressing to a Title II approach might have on private companies’ ability to attract capital and their continued incentives to invest and innovate, as well as the potentially negative impact on job creation that might result from any reduction in funding or investment,” the letter said.

Here are the 28 lawmakers who lobbied the FCC this week and their reported campaign contributions: 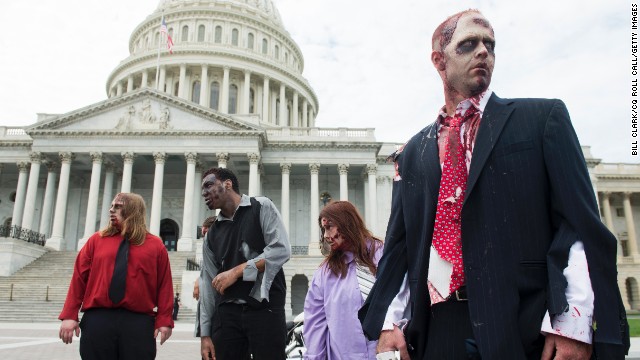 Zombies stumble across the East Plaza of the U.S. Capitol to promote ‘The Warehouse: Project 4.1’ urban haunted house in Rockville, Maryland, on Wednesday, October 3, 2012.

Washington (CNN) — Never fear the night of the living dead — the Pentagon has got you covered.

It has also devised an elaborate plan should a zombie apocalypse befall the country, according to a Defense Department document obtained by CNN.

In an unclassified document titled “CONOP 8888,” officials from U.S. Strategic Command used the specter of a planet-wide attack by the walking dead as a training template for how to plan for real-life, large-scale operations, emergencies and catastrophes.

And the Pentagon says there’s a reasonable explanation.

Nevertheless, the preparation and thoroughness exhibited by the Pentagon for how to prepare for a scenario in which Americans are about to be overrun by flesh-eating invaders is quite impressive.

A wide variety of different zombies, each brandishing their own lethal threats, are possible to confront and should be planned for, according to the document.

Zombie life forms “created via some form of occult experimentation in what might otherwise be referred to as ‘evil magic,’ to vegetarian zombies that pose no threat to humans due to their exclusive consumption of vegetation, to zombie life forms created after an organism is infected with a high dose of radiation are among the invaders the document outlines.”

Every phase of the operation from conducting general zombie awareness training, and recalling all military personnel to their duty stations, to deploying reconnaissance teams to ascertain the general safety of the environment to restoring civil authority after the zombie threat has been neutralized are discussed.
And the rules of engagement with the zombies are clearly spelled out within the document.

“The only assumed way to effectively cause causalities to the zombie ranks by tactical force is the concentration of all firepower to the head, specifically the brain,” the plan reads. “The only way to ensure a zombie is ‘dead’ is to burn the zombie corpse.”

There are even contingency plans for how to deal with hospitals and other medical facilities infiltrated by zombies, and the possible deployment of remote controlled robots to man critical infrastructure points such as power stations if the zombie threat becomes too much.

A chain of command from the President on down along with the roles to be played by the State Department and the intelligence community for dealing with the zombie apocalypse are clearly spelled out in the document.

This is also not the first time zombies have been used as the antagonist in U.S. government training operations. Both the Centers for Disease Control and the Department of Homeland Security have used the creatures as a vehicle for training their personnel in the past.

Defense officials stress the report in no way signals an invasion of zombies is on the horizon. The only real purpose of the document was to practice how to execute a plan for handling something as large and serious a situation like flesh-eating beings trying to overrun the United States.

Officials familiar with the planning of it say zombies were chosen precisely because of the outlandish nature of the attack premise.

“Training examples for plans must accommodate the political fallout that occurs if the general public mistakenly believes that a fictional training scenario is actually a real plan,” the document says. “Rather than risk such an outcome by teaching our augmentees using the fictional ‘Tunisia’ or ‘Nigeria’ scenarios used at (Joint Combined Warfighting School), we elected to use a completely impossible scenario that could never be mistaken as a real plan.”

So, practice for the when, where and how to plan for a more likely disaster scenario? Yes. But zombies of all stripes would be well advised to take note of this directive to Strategic Command personnel buried within the document.